Here you can find information about what is new in Carbon Compass version 1.2.12.

To additionally protect the overcut and allowance area, the dynamic "lock" icon is now displayed when a user hovers the mouse over the overcut/allowance zone. Also, the zones are drawn in grey-yellow, grey-red colors correspondingly. The slider cannot be moved into a locked area. 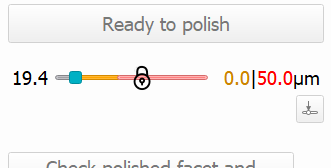 If the user clicks this icon, the zones become unlocked, their color changes to bright-yellow, bright-red, the icon changes to unlocked lock, and the slider can be moved into both zones.

In the Next Step Plans panel, the Allowance section, the Angle parameter is renamed to Slope. The usage of the parameter is temporarily blocked (next step calculation does not consider this parameter) due to technical reasons (planned to be restored in the upcoming releases).

The Slope and Depth default values are now taken from the configuration file (saved there on user input in the corresponding fields).

For the Table, the default values are always "0".

The following fixes for the known problems and improvements are implemented: